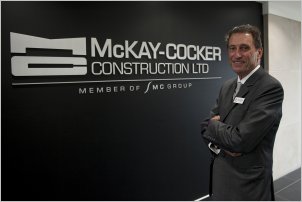 Paul H. Cocker was the President and CEO of McKay-Cocker Construction Limited, a company founded in 1946. He joined McKay-Cocker Construction Limited after graduating from Ryerson Polytechnical in 1970, in Structural Engineering. He earned his Gold Seal Certification in both Project Management and Estimating. He received Ryerson University’s Alumni Award of Distinction in 2013 and was inducted to the London Business Hall of Fame in 2012.

Paul served as President of the Ontario Institute of Quantity Surveyors in 1982/1983. He was responsible for the restructuring of this organization to avoid duplication with the National Institute and the local chapters.

He chaired the Technical Advisory Board for Fanshawe College and was a member of that board for six years. During his tenure, he assisted in revisiting the duties of this committee to avoid duplication in the review of reports and recommendations by subcommittees. With the Board of Governors’ approval, the Technical Advisory Board ventured into analyzing the public awareness of the community college courses and job prospects. They reached out to grade school and high school students to make them aware of the excellent employment opportunities in technology.

Paul was a Director of the London chapter of the Ontario Heart Fund for four years and chaired the Corporate Fund Raising Campaign for the London area.

Paul is a member of the London Squash Racquets Club. He served on the Board of Directors for seven years, chaired the House Committee, and served as President of the Club in 1991. Two major expansions took place during his term on the Board and Mr. Cocker was an integral part of the planning of these expansions, as well as the financing structure.

Paul joined Alzheimer Society of Canada as a member of the President’s Council in 1995 and was a member of the Board until 2002 and was Chair of the Construction Committee for Pillar Non-Profit’s Innovation Works Project.

McKay-Cocker was a sponsor for Habitat for Humanity and Mr. Cocker encouraged all employees to embrace the challenge. McKay-Cocker estimating and field personnel were able to reduce the project cost and company volunteers were involved in the build.

Today, he is on the board of the TAP (the Arts Project), a member of the London Middlesex Immigrant Employment Council, and is a member of the site selection committee for a new Children's Museum. Paul also served on the Construction Committee for the recent major expansion at the London Hunt and Country Club.

Paul joined the Fanshawe College Board of Governors September 1, 2016.