What would happen if there was a large scale emergency event in London? Would our network of protective services be ready? How would we, as a community, respond?

Emergency Preparedness Week falls in May each year – a national event that encourages Canadians to take concrete actions to be better prepared to protect themselves during emergencies. Since 2008, it has also been a call to Fanshawe College, its students, and London's first responders to test their mettle in real life emergency scenarios.

For more than a decade Fanshawe has held training days, which have evolved into two large training events each year on London's main campus. The simulated but extremely realistic scenarios involve screaming ambulances and other emergency vehicles, plus blood, vomit and injuries consistent with the situation: a plane crash, an overturned bus, a meth lab explosion, or other mass casualty incident.

“The exercises are a real-time test of our own ability to respond, and also demonstrate how effectively we are communicating with and working with our community partners, and how we can better support each other,” says Brenda Henry Acting Manager, Fanshawe's Emergency Management Office.  Additionally, says Henry, “If the police or fire department or medical services have specific training objectives, we will try to ensure part of the training scenario accommodates that.” The college's resources are part of the city's emergency response plan, she adds, “For example, we have a command vehicle that we can deploy if needed in a real situation or offer our residences as temporary housing during an evacuation.”

Throughout the exercises students work alongside the community professionals and receive valuable feedback. “We practice all of the time in our labs, but this event takes students to the next level,” says Chris Slabon, professor with Paramedic Programs, School of Public Safety.

This year's scenario started as a peaceful student protest that escalated when a vehicle drove into the protesters and a chlorine gas tank was opened, releasing chlorine gas into the crowd. That added a new element to the exercise: affected people needed to be decontaminated.

For many students, training day is their first experience collaborating with students in other programs in a real-time, under-pressure situation. Emergency Telecommunications students process simulated 911 calls, then dispatch Paramedic and Police Foundations students and community partners. Students arrive on scene to treat patients (who are actors in Theatre Arts programs and community volunteers), with nursing students providing triage and patients being transported by paramedic students in an ambulance to a simulated hospital. Police Foundations students manage crowd and traffic control and incident investigation. Media students handle the media. Emergency Management students get a big-picture taste of what they might run into in the future. And film students are on hand to videotape the action from start to finish.

Emma Laird, who graduated in April from the Paramedic program and is now working with the Oxford County Paramedic Service, recalls how realistic the training day scenarios were. In one, she says, “There was a wedding, some of the guests had gotten sick and there was a stabbing. The make-up and props were so realistic, and it was a very dynamic environment ­– loud music, we had to make our way through the crowd – plus we had to work with other crews, for example local firefighters came out and participated in the scenarios with us." Although she had practiced different skills regularly throughout the program, Laird says, “This was way above and beyond what could be simulated in the labs.”

That sentiment is echoed by community partners who appreciate the opportunity to add a layer of realism to their ongoing training and practice regimens. This year London Health Sciences Centre set up a decontamination site in a campus parking lot, just as they would do at the hospital in a real situation, with the mock hospital site staffed by medical students from LHSC and Schulich School of Medicine. Twelve members of the London Fire Department's HazMat team were also on hand to assist with decontaminating people who were exposed to the chlorine gas. HazMat team members are firefighters who have completed additional specialized training in chemical response, and are called to attend incidents that involve hazardous materials.

London Fire Department is a regular participant in the Fanshawe College events, and firefighter Reid Doyle, who is a HazMat training instructor, says he is very appreciative to be involved in the mock scenarios. “We are constantly training, but we don't have the resources to simulate large crowds,” says Doyle. “Fanshawe, with its abundance of students, gives us a tremendous opportunity to practice with simulated patients.”

All of which should give the public some peace of mind about what would happen if there really was a large scale emergency incident in our city. Rest easy, London! We may not see them in action every day, but our emergency responders have again demonstrated that we, as a community, are prepared. 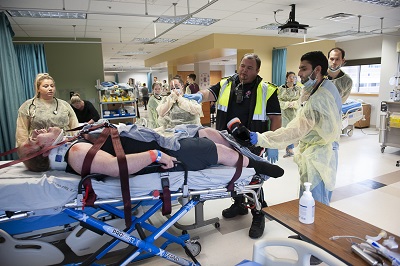