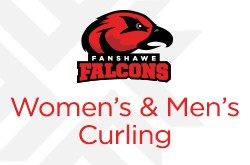 (London, Ontario) – The Fanshawe Men's, Women's and Mixed Curling teams had a successful weekend at the OCAA Provincial Championships in Sault Ste. Marie. The Falcons Men's team took home the gold medal, while both the Women's and Mixed teams finished with a silver.

The Men finished the round robin in second place with a record of 4-2. In the semi-final, Fanshawe defeated the Niagara Knights by a score of 5-2. In the final, the Falcons would take on the host Sault Cougars and won 7-4 to take home the 2018 OCAA Provincial Championship banner.  Falcons Second Tyler Twinning (Owen Sound, ON) and Vice Logan James (Brantford, ON) were named First Team All-Stars.

The Women's team finished 3-2 after round robin play, good for second place. This set them up for a semi-final match against the Fleming Knights. At the fourth end break, the Knights held a 5-0 lead, but the Falcons came back to win 10-7. In the final, Fanshawe stole one in each of the last two ends to force an extra frame but ultimately dropped a 10-7 decision to the Niagara Knights to give the Falcons the silver medal.  Fanshawe Second Samantha Lees (St. Thomas, ON) was named a First Team All-Star, while Lead Isabelle Allan (Carp, ON) and Vice Erin White (Chatham, ON) were named Second Team All-Stars.

The Mixed team had a round robin record of 2-2 which put them in second place in the standings. The Falcons faced the Sault Cougars in the Final, however fell behind early and could never recover, losing the game 7-2.  They would also go home with a silver medal. Fanshawe had two OCAA Mixed All-Stars; Second Nicolas Robinson (Mount Brydges, ON) and Vice Angelica Muscedere (Bright's Grove, ON). Shirley Westman won Coach of the Year for OCAA Mixed Curling.

Both the Men's and Women's Teams advance to the CCAA National Curling Championships in Leduc, Alberta from March 24-28. The Fanshawe Men's team are the reigning CCAA National Champions.