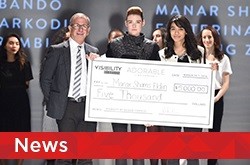 Fanshawe student Manar Shams has won $5,000 and the Visibility by Design competition.

The Visibility by Design contest was created in 2015 by Adorable Outerwear, a leading outerwear company headquartered in Montreal. Students from five schools in the Greater Toronto Area were challenged in September 2015 to create an innovative and stylish men's or women's outerwear garment that incorporates enhanced visibility features.

Manar's submission, entitled Transcendence, "combines inspiration from the vastness of outer space, to the sleek silhouettes of modern architecture. This theme embraces the night with its reflective features and the design of a night sky literally sewn onto the garment. It resembles the way a darker environment can make stars shine more brilliantly. “Transcendence” is existence and experience beyond the physical level. It uses reflective materials as a beautiful detail in itself."

Manar and 14 other finalists showcased their designs at the contest's fashion show at Metro Hall on March 14 during Toronto Fashion Week.