The A.M. (Mac) Cuddy Gardens has evolved since the early 1950s developing from a rural Ontario farm into the current estate commonly referred to as the Cuddy Gardens. A. M Cuddy made his fortune with Cuddy Farms, which is the world's largest producer of turkey poults and turkey hatching eggs; the adjacent hatchery currently ships eggs and poults from its 35 Strathroy area farms worldwide. A.M. Cuddy, the founder of Cuddy Farms had always taken a keen interest in horticulture and the landscape and insisted that the corporate properties exemplify the finest in horticultural and landscape management practices.

The A.M. (Mac) Cuddy Gardens that you see today developed as a park-like landscape under his direction until 1991. In 1991 Michael Pascoe, a graduate of the Niagara Parks Commission School of Horticulture was hired to design and develop the gardens and corporate properties and bring them to the level that exemplifies horticultural excellence. Cuddy Farms at the time was one of a few large corporations with a small but dedicated in-house horticultural maintenance division. IN 2006 Patricia Van Omen Cuddy donated the gardens and house to Fanshawe College, the Horticulture Technician Program now manages it.

As early as 1992 Michael and his crew instituted an organic lawn care program on the 100 acres of lawn surrounding the corporate properties. The lawns currently within the A. M. (Mac) Cuddy Gardens have not seen an application of chemical fertilizer or pesticide since 1991. The A. M. (Mac) Cuddy Gardens took approximately five years to build with the majority of the work undertaken by Michael and his staff. Driveways were moved, walks and patios laid, arbours and fences built and night lighting installed.

The gardens reflect the English planting style (Michael is English), and are developed as complex layers of plants with changing venues weekly. The gardens are well known throughout Southern Ontario and USA; the gardens hosted The Perennial Plant Association in 2000 and were the first Canadian Gardens to be honoured by them in 1995 for exemplary design use of perennials and woody plants.

Under the watchful eye of Lucas Michielsen continue to thrive and expand with additions to many of the garden areas. Lucas is a graduate of Fanshawe's Horticulture Technician program and has a keen interest in unusual plants. Plants in this garden are not pampered; they are given one chance with the only supplemental supports being water and mulch.

The gardens are planted with over 2,000 different species of plants and maintain associations with botanical gardens throughout the USA and Canada: on March 24th 2009, the gardens became part of Botanic Gardens Conservation International and thus officially became a botanical garden.

In May some one hundred thousand bulbs bloom throughout the garden, with over 30,000 narcissus of some thirty different species and cultivars flowering in the woodland garden. Additionally the garden is home to several rare and endangered plants such as the Yellow Trillium (Trillium luteum), and Cucumber Magnolia (Magnolia acuminata).

The Dry Garden: This garden is now 19 years old and features plants that thrive in a dry climate and utilizes foliage as opposed to blooms. The gravel paths simulate a Mediterranean feel and are actually planted with minor bulbs such as Netted Iris (Iris reticulata) and self-sown perennials and biennials. Masses or ornamental grass are the late summer highlights that carry the garden through the winter season, four Liquidambar styraciflua 'Slender Silhouette' anchors each of the four beds, the first two beds being shorter in length to give the illusion that they are the same size when viewed from a distance. This particular garden won a Perennial Plant Association award for perennial design in 1995.

The Prairie Garden: This garden delineates the transition between the formal lawn areas of the property and the gardens themselves. Spectacular in late autumn through winter into early spring this garden's dominant feature is masses of late season perennials such as Rudbeckia and Echinacea species combined with a variety of ornamental grasses.

The Woodland Garden: This garden recently underwent an expansion with the Primrose Walk (the path on the east side) added in 2001-2. In early spring the garden is ablaze with Daffodils, Siberian Squill (Scilla siberica) and other exotic and rare minor bulbs. Rhododendrons, Redbuds (Cercis canadensis), a White bud (Cercis canadensis 'Alba') and Goats beard (Fothergilla monticola) comprise the mid canopy while the upper canopy is a mixture of River Birch (Betula nigra), Tulip Poplar (Liriodendron tulipifera), Shingle Oak (Quercus acutissima) and Blue Ash (Fraxinus quadrangulata). The late spring and summer display features numerous varieties of Trillium, ferns, Corydalis, Butterbur and Hosta. The humus layer in this garden, of primary importance to the plant species being grown is enriched every year by the addition of leaves collected from all the formal lawn areas of the garden.

The Rock Garden: was renovated and expanded substantially in 2011-12 and now houses extensive plantings of mixed alpines from around the world. Home to native cactus (Opuntia sp.) these gems produce delicate tissue like flowers of yellow and shocking pink in summer. Spring highlights include various Fritillaria and Adonis species and a collection of dwarf conifers, of note is the Silberlocke Fir.

The Perennial Border: A very traditional aspect of the garden this border is original to the garden in placement since 1980. It however has undergone extensive renovation with a new border installed directly opposite and enclosing the linear space with a stonewall and a cedar fence. Of particular note in May is the Ornamental Rhubarb (Rheum palmatum), alliums are a dominant summer bulb. Late season interest is maintained through the use of goldenrod (Solidago sp.) and Asters. The Rose Garden is currently under development with new plantings of Canadian bred roses becoming the dominant planting. To date over 60 Canadian bred roses have been planted with more added each year. A shrub border to the east side of the garden was planted in the summer of 2002.

The Patio Garden: One of the most relaxing places in the garden, the arbour is enveloped in large panicles of white wisteria bloom in late May; it is as if the entire arbour is dripping with icicles. English boxwood (Buxus sempervirens), which needs protection from drying winter winds, also grows here.

In 2012 the Louise Weekes Hosta Collection was opened. This garden currently features over 150 types of Hosta under planted with various spring and autumn flowering bulb. To reach this garden you must pass along the grass borders.

A core component of the gardens is that all of the new development as well as routine maintenance is done through the Horticulture Technician program, giving the students real horticulture experience. 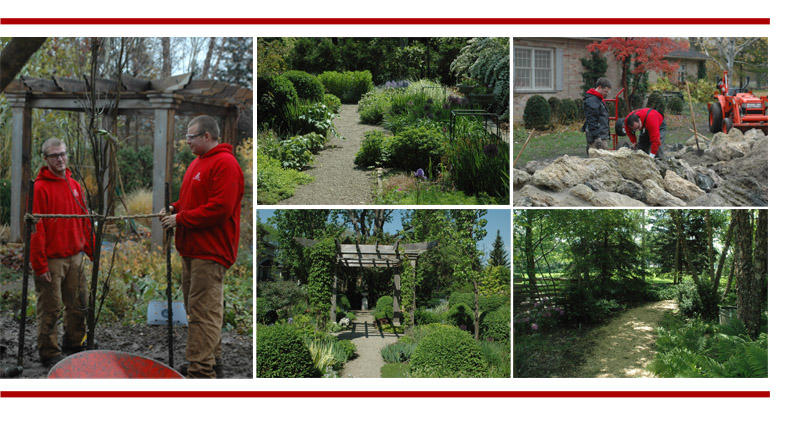