Haviah Mighty helping celebrate 30 years of rap at the JUNOS

Fanshawe alumna and Polaris Prize recipient Haviah Mighty has been tapped as one of six artists to help the JUNOS celebrate the 30th anniversary of Rap Recording of the Year, this Sunday, June 6, 2021.

Mighty attended Music Industry Arts at Fanshawe from 2011 to 2013, and has returned to lecture for the program several times. In March 2019, she performed at Fanshawe's London Downtown Campus as part of Fanshawe Live during JUNO Week. 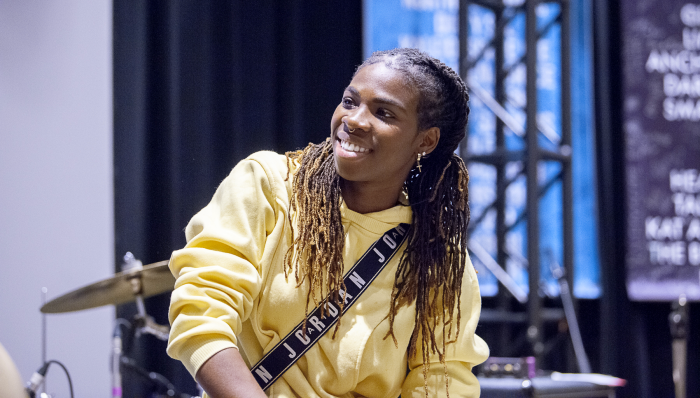 “To perform at the JUNOS is obviously a huge honour, but for Haviah to be there celebrating 30 years of Rap Recording of The Year as a Polaris Prize winner is just incredible!” exclaimed Dan Brodbeck, Grammy-nominated, JUNO-winning program coordinator of the Music Industry Arts and Audio-Post Production programs at Fanshawe. “We are so proud of her and all she is doing.”

Mighty is the rising star performing alongside the following industry pioneers and icons:

The six artists will pay tribute to the 30th anniversary of the JUNO Rap Recording of the Year category and the influence the genre has had on the Canadian music industry as a whole during this special celebration on the broadcast.

Haviah Mighty was raised in a musical household in Brampton, Ontario. She started singing at the age of four, rapping at 11 and producing by the time she was 15 years old.

She has two albums and five EPs under her belt, including the 2018 track "Vámonos" which appeared on HBO's hit series Insecure and “Obeah” which was featured in Rolling Stone earlier this year. Mighty is also one of four MCs who make up The Sorority, a hip-hop group born during an all-female cypher on International Women's Day in 2016. She has won the prestigious 2018/2019 Allan Slaight JUNO Master Class and the 2019 Polaris Prize, and she has opened for acclaimed artists like Sheck Wes, Nelly, Desiigner, Kranium, A Tribe Called Red and Snoop Dogg.

“The first time we saw Haviah perform at Share The Land, our annual charity event, we knew we were watching the real thing,” Brodbeck says. “It sounds cliché but there is an X factor to a great performer and Haviah no doubt has it. It’s only the beginning for her."

Mighty will not be the only Fanshawe graduate represented at this year’s JUNOS. Four alumni are nominated across three categories and an additional three are connected to four further nominations.