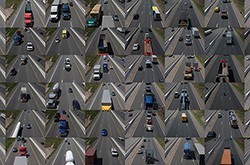 Gary's digital print montage "401EXIT232: East and West," commemorating the historic Highway 401 exit 232 overpass near Woodstock, Ontario, has been purchased by Museum London for its permanent collection. The photo montage was inspired by construction work in 2018 to relocate an overpass once used by London artist Jack Chambers as the vantage point for his painting "401 Towards London No. 1" in the late 1960s.

Gary's images show modern-day vehicles moving along the highway looking west from the new overpass, much like Chambers' painting did from the old bridge. Part of his intent was to capture the busier, nosier atmosphere at the site, which has since grown from four lanes to six and now sees much more traffic.

The work was premiered at the Woodstock Art Gallery in October 2018, along with "Paved Silence," an oil painting Gary created directly in response to Chamber's iconic art. In December 2021, Museum London acquired "401EXIT232: East and West" to display as part of its permanent collection celebrating the history of the region.

To learn more, click the links below to read media articles about Gary's Highway 401 work since 2018: