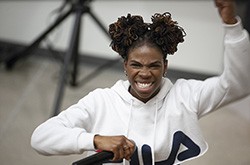 CBC Music announced on Monday, September 16, that Fanshawe College alumna Haviah Mighty has won the 2019 Polaris Music Prize for her most recent album, 13th Floor. This was Mighty's first year being long- and shortlisted for the award.

Mighty received her prize, including a $50,000 cash award, at the historic Carlu in downtown Toronto during a gala hosted by CBC Music's Raina Douris.

The Polaris Music Prize, presented by CBC Music, is given to "the best Canadian album of the year based on artistic merit without regard to genre, sales history or label affiliation," according to the Polaris website at https://polarismusicprize.ca/blog/haviah-mighty-has-won-the-2019-polaris-music-prize-for-the-album-13th-floor. Mighty's win was determined by a grand jury of 11 music media professionals from across Canada in fields such as writing, editing, broadcasting, jockeying, music journalism and others.

"Fanshawe College and our Music Industry Arts program are extremely proud to call Haviah Mighty a grad," says Dan Brodbeck, coordinator of the Music Industry Arts program. "Since she graduated in 2013, we have seen Haviah grow as an artist and always believed that it would only be a matter of time before her talent was recognized nationally. She is a shining example of what our students are capable of."

Mighty attended Music Industry Arts at Fanshawe from 2011 to 2013, and has returned to lecture for the program several times. In March 2019, she performed at Fanshawe's London Downtown Campus as part of Fanshawe Live during JUNO Week.

"Haviah is proud of her time at Fanshawe College and always returns for guest lectures and performances," Brodbeck explains. "Her dedication to her craft and work ethic has been an example in our program of what it takes to succeed."

Haviah Mighty was raised in a musical household in Brampton, Ontario. She started singing at the age of four, rapping at 11, and producing by the time she was 15 years old.

The 26-year-old artist, named one of XXL's 15 Toronto Rappers You Should Know in 2019, has five EPs under her belt since 2010, including 2017's Flower City, which propelled her solo career. In 2018, Mighty's track "Vámonos" appeared on HBO's hit series Insecure. That same year, Mighty was declared winner of the prestigious 2018/2019 Allan Slaight JUNO Master Class. Mighty is also one of four MCs who make up The Sorority, a hip-hop group born during an all-female cypher on International Women's Day in 2016. She has opened for acclaimed artists like Sheck Wes, Nelly, Desiigner, Kranium, A Tribe Called Red and Snoop Dogg.

In May 2019, Mighty released 13th Floor, her most fully-realized body of work to date, and continues to carve out spaces that boldly defy gendered expectations for women in hip hop. To find out more, visit her website at www.haviahmighty.ca.