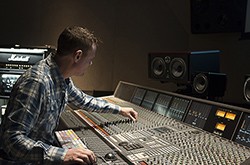 MIA coordinator Dan Brodbeck engineered and co-wrote for 'Best Rock Album' contender In The End by the Cranberries.

Fanshawe College professor and Music Industry Arts program coordinator Dan Brodbeck has been nominated for a 2020 Grammy Award for his work on Irish alt rock group the Cranberries' final album, In The End.

Released in April 2019, In The End is the Cranberries' eighth and final studio album, and was nominated for a Grammy in the 'Best Rock Album' category. The album features vocals by lead singer Dolores O'Riordan, a close friend of Brodbeck's, recorded before her death in January 2018. Brodbeck engineered some of the album and also co-wrote the track "Summer Song," sharing a credit with O'Riordan.

Brodbeck previously worked together with O'Riordan as recording engineer, co-writer and guitarist. He won a Juno Award in 2010 for Recording Engineer of the Year for his work on the songs "Apple of My Eye" and "Be Careful" from her 2009 solo album, No Baggage. In 2017, he was nominated for Record Producer of The Year at the Country Music Association of Ontario Awards for his work on Dani Strong's "Time To Breathe."

The 2020 Grammy Awards will be hosted by Alicia Keys at the Staples Centre in Los Angeles, California on January 26, 2020.