S-nabbing their slice of the pie: Drone food delivery

Pizza and beer on a Friday night? We can deliver that! No time to go out and grab lunch? We can bring it to you!

In recent years London has seen a proliferation of on-demand delivery companies enter the local market, from Skip the Dishes to Uber Eats. When Brennan Berlemont and Ahmed Safadi started Snabb Delivery in 2016 ('snabb' means 'fast' in Swedish) they were prepared to compete for a slice of the delivery-business pie. What they didn’t count on was having to compete for drivers too.

“The demand for delivery drivers exceeds the supply, particularly for short distance deliveries that are not as lucrative, and in the downtown core where it can be difficult to find parking,” says Berlemont. “There is also the environmental impact of having cars sitting and idling, particularly in congested areas like the downtown.” These are problems that Berlemont and Safadi figure will only get worse over time. Their solution? Build an electric-powered sidewalk drone to deliver short-distance downtown orders. 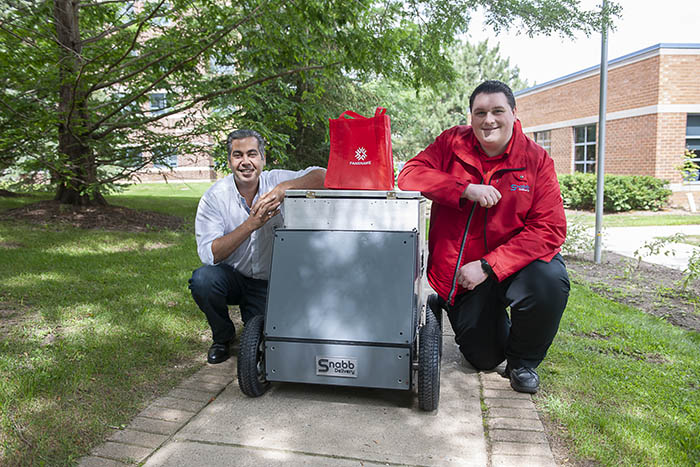 Ahmed Safadi and Brennan Berlemont, partners at Snabb Delivery, pose with their sidewalk drone designed and built by Fanshawe’s faculty and students in the School of Applied Science and Technology.

That’s when the business partners turned to Fanshawe College for help. “We knew that Fanshawe had a lot of resources, so we reached out,” says Berlemont. They connected with the Centre for Research and Innovation (CRI) and faculty in the School of Applied Science and Technology (AST) in 2017. By 2018 CRI had secured research funding and AST had started to design and develop the drone.

The first phase focused on creating a functional electric-powered remote-controlled vehicle that could safely travel on the sidewalk at human walking speed. There would be sensors to ensure no collisions with foot traffic, a secure storage area and the capacity to carry a standard delivery order – for example, two large bags of food, or a case of beer and a pizza.

For Berlemont, it was also important that the drone be built with components that are already readily available – like wheelchair parts – rather than custom-built. “It’s a practical approach, to keep the cost down to build and repair them,” he says.

Subsequent phases will see the move to a fully autonomous vehicle with the potential for cross-over into other commercial applications.

“Companies approach us to access Fanshawe’s expertise and resources when they have a problem to resolve,” says Ian Butcher, a research facilitator with CRI. “We will scope out the project, match the company with the faculty, set timelines for deliverables, apply for funding and manage the project to stay on schedule and on budget. Projects help our business partners and also give our students meaningful experiential learning opportunities in a live environment and help prepare them for what they will experience when they go to work in a professional workplace. It really gives them a leg up in the job market.”

When the first Snabb drone was tested on campus in August, Colin Delogu was at the controls. Delogu started working on the Snabb project as a student in the Electromechanical Engineering Technician program (he graduated in 2018) and now works with AST, looking after the mechanical parts of the drone. The first test drive went as expected – some things worked well, others not so much, which is all part of the development process, says Delogu. “The wheels didn’t turn as well as we wanted—there was too much friction. Maybe we need to use different tires or change tires with the seasons. Maybe we need a lighter weight frame and box. If nothing fails, you can’t learn.”

“Having that first prototype – just to see it as a real thing, that’s big for us,” says Safadi. “We knew that things would have to be modified.” The prototype, basically a steel box on wheels, will eventually have rounded corners and an attractive visual design, he adds, but “the priority is to ensure that it works properly. Beautification comes later.”

After the test drive, plans were still on track to launch the delivery drone on campus in October, initially targeting Fanshawe’s student residences. The delivery area will gradually extend to neighbouring residential streets and the goal is to have Snabb drones navigating the downtown core area in 2020.

In the future Berlemont and Safadi have their sights on Toronto and other high-density cities, but for now they are committed to using the drone technology in London. “It’s been amazing how much support Fanshawe and the City have provided. I’ve had the opportunity to work with many different faculty members and students because the College offers such a range of expertise,” says Berlemont. “People may think of things like this happening in Silicon Valley or other high-tech areas, but I say, why not here in London?”

This project was made possible by the generous funding provided by OCE (Ontario Centres of Excellence) Voucher for Innovation and Productivity II grant and NSERC (Natural Science and Engineering Research Council) Applied Research and Development grant.