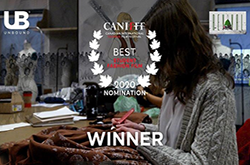 UNBOUND Revival, a collaborative film project between Fanshawe’s Fashion Design program and more than 50 students from various other programs across the College, has won the award for Best Student Film at the 2020 Canadian International Fashion Film Festival (CANIFF).

The film explores the issue of over-consumption in the fashion industry, how those choices impact the environment and ways designers can adapt to create fashion-forward reduced waste designs.

Loren Carriere, a professor in Fanshawe’s Fashion Design program and the film’s director, says the film demonstrates a collaborative and innovative spirit as faculty and students worked to adapt to the challenges posed by the COVID-19 pandemic.

“We were six weeks away from hosting our signature end-of-year runway fashion show when the lockdown happened,” says Carriere, who recalls reaching out to other fashion programs across the province to see how they were planning to adapt. “They all said, ‘it’s over.’ But it couldn’t be over. We put too much time and energy into the show.”

In the early days of the lockdown, Loren learned that the fashion industry was beginning to transition away from traditional runway shows toward fashion films. “Since we were already working with video effects students on a video to play during the fashion show, we decided to go all in and have the students shoot more content on their cell phones from home and add that to the runway trailer,” she says.

The film follows 11 third-year Fashion Design students as they navigate the challenges posed by the pandemic to complete their capstone collections. Madelin Terejko, one of the students featured in the film, says it was a difficult situation that offered a great opportunity to reach more people with an eco-fashion message. “I really count myself so grateful to have a platform to be able to have voice on change,” she says.

The film premiered October 23 during the Forest City Film Festival and was among 160 films from around the world to screen during CANIFF’s online festival on October 26 and 27. It was also nominated for Best Canadian Fashion Film and Best Eco Message.

The film is available to stream at www.canifff.com. Click on ‘watch awards ceremony’ and scroll through to 25:28 to watch the film.