On Saturday, October 19, Fanshawe paramedic student, Mike Katsoulis had just finished running a 10k race at Gibbons Park when a participant fell about 100 metres from the finish line. Four of his colleagues from Mosaic Medical – Blair Collins and Fanshawe graduates Jacob Mclean, Deandra Klunder and Brian Sands who were working as event medical staff responded to the situation thinking it might have been a sprained ankle. It quickly became much more serious as the race participant was complaining of chest pain and left arm discomfort. Once Mike saw the patient was in cardiac arrest, he put his education to good use and worked with the team in a life and death situation.

He went over to see what was going on and saw one of the medics performing compressions on the patient. He quickly became involved in helping save the patient who was VSA (vital signs absent). Using an AED machine, Mike and the team were able to administer a shock and continue with chest compressions and manual resuscitations using a BVM (bag valve mask) while waiting for fire and emergency crews to arrive. The team was able to resuscitate the patient who was quickly taken to the hospital to recover in ICU. 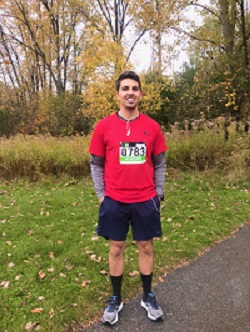 In an email Mike sent to his professor Chris Slabon he said, "I want to thank you for everything you've taught in class and lab class. Because of it, I was able to help run the code (as a bystander in my running attire) and I'm thankful that I knew the proper sequence of steps needed for running a VSA. This was my first-ever VSA and I really was not expecting it, especially since I was not on a placement shift or at work. I know not all VSAs have the same outcome and I'm thankful for everything you and the Fanshawe instructors have taught me because I was able to help save this person's life yesterday."

Mike also said, "Even under the pressure of this stressful situation, we were able to follow the proper sequence of steps for running a cardiac arrest and early defibrillation was able to save a life."