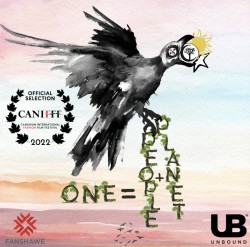 (London, Ontario) – A film produced by Fanshawe College students and faculty has been nominated for Best Eco Message at the Canadian International Fashion Film Festival (CANIFFF).

“ç†√†” (ONE) was produced as part of Fanshawe’s 2022 UNBOUND Fashion Show. The film focuses on a young Indigenous girl as she sits by a campfire reading the book “One = People + Planet.” It is an Ojibwe-language film and was a collaboration between Indigenous and non-Indigenous filmmakers and fashion designers.

“It’s so exciting for our students and faculty to see their work nominated by CANIFFF for Best Eco Message,” says Loren Couto, sustainable fashion professor, creative director of UNBOUND and Canadian ambassador for sustainable fashion film at CANIFFF.

“Fanshawe is a leader in sustainable fashion design, and this has been a wonderful opportunity for students in a number of programs to demonstrate their skills.”

UNBOUND serves as a capstone project for students in the Fashion Design advanced diploma program. Since 2020, the project has moved away from a traditional runway show and toward new, innovative ways for students to display their work. The fashion films are produced in collaboration with students from across Fanshawe’s Faculty of Creative Industries, including Advanced Filmmaking, Music Industry Arts and Visual Effects and Editing for Contemporary Media.

The Canadian International Fashion Film Festival and Awards will take place in Toronto from November 28 to 30.