Video content creators are the backbone of the media and entertainment industry. With multiple delivery platforms and high-tech tools available, the need for skilled and talented producers is higher than ever! Fanshawe’s Broadcasting – Television and Film Production program puts you behind the scenes of television and film production with hands-on training in the largest TV and film studio outside of Toronto. Graduate ready for a career in public and private broadcasting, audio/video production studios and production departments.

I am a domestic* applicant and I am ready to apply to Fanshawe!

I am an international applicant and I’m ready to apply to Fanshawe!

In this two-year, hands-on diploma program, you will work behind the camera producing a variety of films and shows, including narratives, documentaries, live sports, news, commercials and promotions. Write, produce, shoot and edit video content that will be aired throughout the region or shown at film festivals. Along the way, you'll be mentored and guided by industry professionals, applying your skills in field placements in the industry.

When you graduate, your portfolio will include experience in all areas of creative and technical video content creation, including studio production, cinematic production, field production, mobile sports production, computer graphics, post-production editing, scriptwriting and sales, marketing and entrepreneurship.

For students interested in studying further, Western University and Fanshawe College have developed an articulation agreement, which gives you the opportunity to obtain an honours degree in Bachelor of Arts with a major in Media, Information and Technoculture (MIT), as well as a diploma in Broadcasting - Television and Film Production. Students may start at Fanshawe, transferring into the third year of the MIT program, and complete both credentials in only four years.

If you are interested in the behind the scenes action of television and film production, and are eager to get hands-on training in one of the largest and most state-of-the-art facilities in Canada, the Fanshawe Broadcasting - Television and Film Production program is for you. 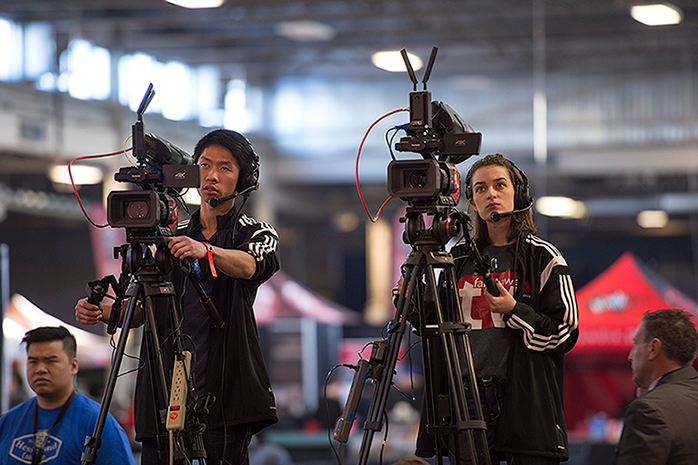 OSSD with courses from the College (C), University (U),
University/College (M), or Open (O) stream WITH:
- Any Grade 12 English (C) or (U)
OR
Academic and Career Entrance Certificate (ACE)
OR
Ontario High School Equivalency Certificate (GED)
OR
Mature Applicant with standing in the required course stated above

*Total program costs are approximate, subject to change and do not include the health and dental plan fee, bus pass fee or program general expenses.